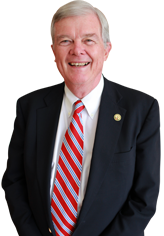 Recognized by Peers — Lawyers and Judges

Civil trial law is the practice of law dealing with litigation of civil controversies in all areas of law before state courts, federal courts, administrative agencies and arbitrators.

‘Business Litigation’ is the practice of law dealing with the legal controversies arising from commercial and business relationships and constitutional law handling and resolving such controversies before state courts, federal courts, administrative agencies, mediators, and arbitrators.

Mr. Gibson has served as General Counsel to the Governor of Florida and is the principal drafter of the provision in the Florida Constitution creating the governance structure for the state’s university system. He has litigated cases across the state involving the state legislature, cities, counties and school boards

Mr. Gibson has handled a number of important cases at both the trial and the appellate levels. Some of the cases have been certified to the Florida Supreme Court as matters of great public importance. Some have established precedent and made law in Florida. A partial list: